The Historical Novel Elias Khoury Gate Of The Sun 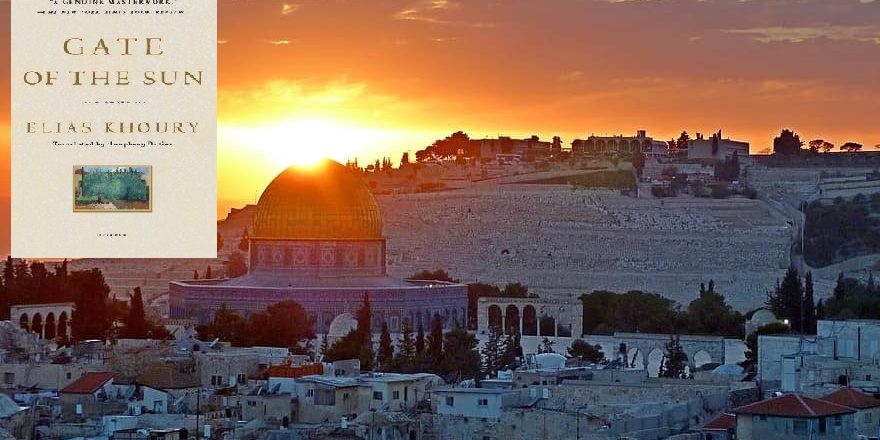 Elias Khoury is a Lebanese storyteller, novelist, critic, and playwright

He was born in the Lebanese capital Beirut in 1948.

He has written ten novels that have been translated into many languages, three plays, and has written many critical writings.

Also, He was the editor-in-chief of the weekly cultural supplement of the An-Nahar newspaper from 1993 until 2009.

He was in charge of the cultural section of Al-Safir newspaper from 1983 until 1990.

He worked as artistic director of Beirut Theater between 1992 and 1998.

He is currently teaching Middle Eastern and Islamic Studies at New York University.

Educated with a deep Christian education

And he realized what injustice means,

Connecting the Palestinian people to Christ and his torments

But what influenced him the most, he believes, was the climate of the left-wing revolutionary movement that swept the world in the 1960s.

Elias has written many novels and short stories,

He won the State of Palestine Prize for the novel

Also, He was considered a writer on a wide level through the publication of his novel “Kingdom of Strangers”, published in 1993.

He became known to readers in European countries, by translating some of his works into their own languages.

Some of his novels have been translated into:

The historical novel Elias Khoury Gate of the Sun 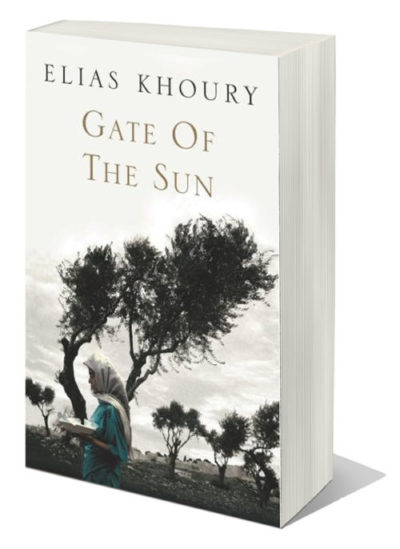 Elias Khoury Gate of the Sun:

He tells the other and himself as if he were Scheherazade, who while she is telling Shahriar her many stories that reproduce every night

Elias Khoury weaves the material for his narration by breaking the personal stories of the Palestinians.

It clarifies the mysterious spots in others.

If the central story in the novel is the story of Yunus Al-Asadi.

The man lying in the Galilee Hospital passed out

And the story of the narrator himself, or the stories of Umm Hassan, Adnan Abu Odeh, Dunya, and the people of Shatila camp

No less central than that basic story that pulls other stories together.

The novel “Gate of the Sun” is based on one of the tales of Palestinian infiltrators.

At the beginning of the fifties, the phenomenon of stealthy returnees to their homeland after the first expulsion became common.

Large numbers of people tired of the early days of exile were sneaking across borders, barbed wire, and the danger of death.

All this is so that they can return to their destroyed villages and homes that were inhabited by others, Jews and Arabs

To return and be expelled again or be killed on the border between “Israel” and the surrounding Arab countries.

But, the story of the infiltrator resistance man Yunus Al-Asadi turns into a tale of love and a symbol of steadfastness. It is transforming into a form of demographic resistance to the Zionist presence.

And so over the course of thirty years, and more

Asadi traverses the mountains and valleys between Lebanon and the Palestinian Galilee.

This was to meet his wife, Nuhaila, in a cave he called “Gate of the Sun” and to have a large number of boys and girls from his wife.

His aim was to maintain the connection between the Palestinian refugee and the rest of their land.

Elias Khoury turns the infiltrator’s story into a historical model. 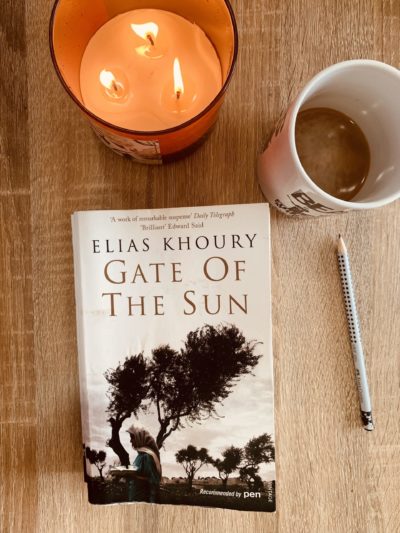 From here argues the historical with the daily.

The controversy appears in a work of fiction that frequently mentioned the word history by the narrator.

“The illusion gives us the feeling that the neighborhood inherits the puzzles of all others.

So they invented history.

I am not cultured

But I know that history is a hoax in order for a person to imagine that he lived from the beginning and that he is the heir of the dead. “

“This is the date you will tell me.

But I am no longer concerned with the history

My story with you, sir, is not an attempt to restore history. “

The narrator who uses the medicine for the story tries to awaken Yunus Al-Asadi from his sleep, going towards the land of death

It is the white land of eternity, as Mahmoud Darwish puts it in his poem “Mural”

To question the concept of history about the continuing Palestinian tragedy by telling a lot of stories about the Great Exodus in 1948.

Stories of refugees outside their land

About massacre victims during and after the exit.

This is how tragic stories emerge from each other in a work of fiction.

This work of fiction aims to inform us about history’s brutality, cruelty, violence, and abuse of its victims.

Although the narrator stresses the illusion of history

The facts that he tells, and the stories he includes in the story of Yunus Al-Asadi

It always brings us back to the tangibility of history and its pressing presence in “Gate of the Sun” novels.

It is therefore a narration of history, about its recovery and an attempt to visualize it through telling the stories that gather in this work

To overflow from between the folds of words

The writer employed the facts reported in history books, documents, and stories that he heard from the mouths of the Palestinians, who were victims of history.

To support his main story about Younes Al-Asadi

That returning person who returned to Palestine and did not return

But he was able to attend through his wife and children whom he had fathered on his journeys from Lebanon to the Gate of the Sun cave.

In this sense, the story of Yunus Al-Asadi is transformed, which is nothing more than just one of many stories about Palestinian infiltrators.

Did Elias Khoury intend to emphasize the historical conflict between the Palestinians and the Israelis?

That conflict that is mainly based on the demographic issue?

The novel, in its intense narrative habit, does not attempt to provide answers to the question of history and its endings

And do not seek to open its last page to the horizon of the future, which appears cloudy and filled with doubts at the time of writing the novel

On the contrary, it seeks to dissolve the question of history into the folds of stories.

It is busy understanding history

It is busy finding an explanation for what happened before, and it’s happening now

That by retrieving the stories

All kinds of stories that the narrator narrates on the ears of Yunus, who is not heard in his long coma, which led him to the land of death at the end of the story.

But this story does not help the narrator to realize what happened and to reach its causes.

In this sense, stories remain mere spots on the body of history.

He also does not understand the ongoing tragedy of Palestinian life.

We can attribute the following words to Yunus, the difference in his coma, in this context:

This is not true, sir. The stories came to me without seeking them

My grandmother used to tell me stories

As if she was not doing anything but talking.

With her, I yawn and sleep, and stories burst through me.

I only see spots

As if the stories of that woman are like the colorful spots floating around me.

I don’t know the whole story. “ 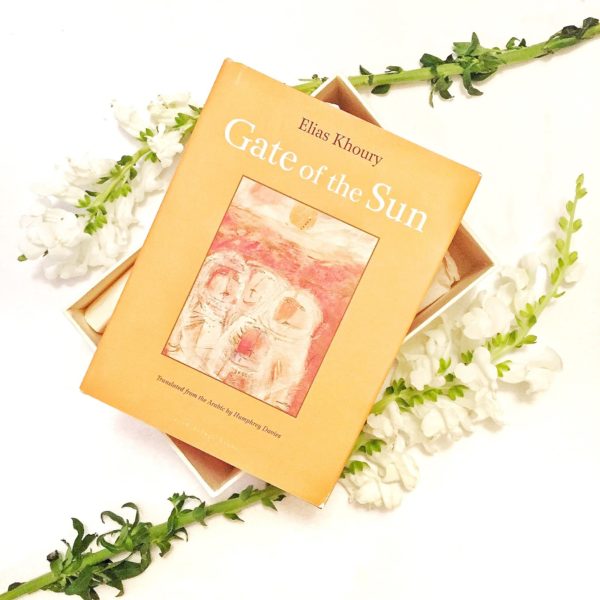 The foregoing is a very brief, brief expression of the whole novel.

It is, in fact, a deluge of stories intersecting each other

This intersection provides an indirect picture of the history of the Palestinians after the Nakba.

This is because of the proximity of the Palestinian Galilee to Lebanon and the similarity of dialects between them.

However, the series of stories narrated by the narrator, on his tongue

They are representative samples from the big story of the Palestinians.

Thus Palestine fell and its people were displaced

“Gate of the Sun” says through the stories narrated by the narrator and the characters that he tells about her and her:

This is the Palestinian tragedy represented by the actual players on the ground of the tragedy and its realistic time.

Hence the history, described by the narrator Khalil, appears to be an illusion.

The stories are the actual history

The sum of these small stories is equal to the great tale of asylum, defeat, and death.

The story of Yunus is one of thousands of similar and different stories that are told and lived.

They all talk about the country, the return, and a dream that was stolen from us and we still dream about it.

Jaber the child during the asylum days with his mother, father, and grandmother.

His father joins the fedayeen. He dies early, killed by (the Arab brothers), the Syrian authorities.

Let us not know the cause and know the resulting wound.

And he becomes a cub in the guerrilla action and is adopted by Yunus.

They become a father and a son, and each compensates the other for what he misses.

Jaber al-Fida’i was in Amman and Lebanon and wounded him and a course in China, and he turned to nursing for his severe injury.

Jaber and Habiba to Shams the Fedayeen, who was the wife of my sacrifice

But he is motorized and psychopathic. She left him to make her own glory as his sacrifice.

We find that the novel completes its narration when it satisfies us psychologically and morally.

Palestine is alive and more years away from it increases attachment.

Our human being is the first … and the last in the equation of life.

The novel ends when Jaber stands on the grave of Yunus, bidding him farewell with his last confession under the cover of night and the ropes of rain.

My dear, what kept me from you, but a woman’s love

And I did not oppress you. Did you not also die for a woman? Sometimes I called it Nahilah, and in any case, it was Palestine

The novel is not summarized.

It is like air. It does not live unless your lungs drink it.

The novel is wonderful

Palestine is in the conscience, memory, and daily livelihood.

It is geography, history, and people.

A woman and a man, love, and life.

As it has been since Adam and Eve.

Palestine is a story without a beginning or end, but it is always told

This is done with the perseverance of a Prophet who wants to deliver his message before death.

With the attractiveness of a storyteller, he survives from the profession of the storyteller

With credibility affects the soul, the mind, the heart, and the spirit. all because the story is Palestine.

Here we reach the end of our article about Elias Khoury Sun of the Gate.

The Most Famous And Effective Said Akl Books
June 23, 2021

Quick Facts About The Famous Writer Elias Khoury
May 4, 2021

The Lebanese Novelist Huda Barakat,life And Books
May 3, 2021