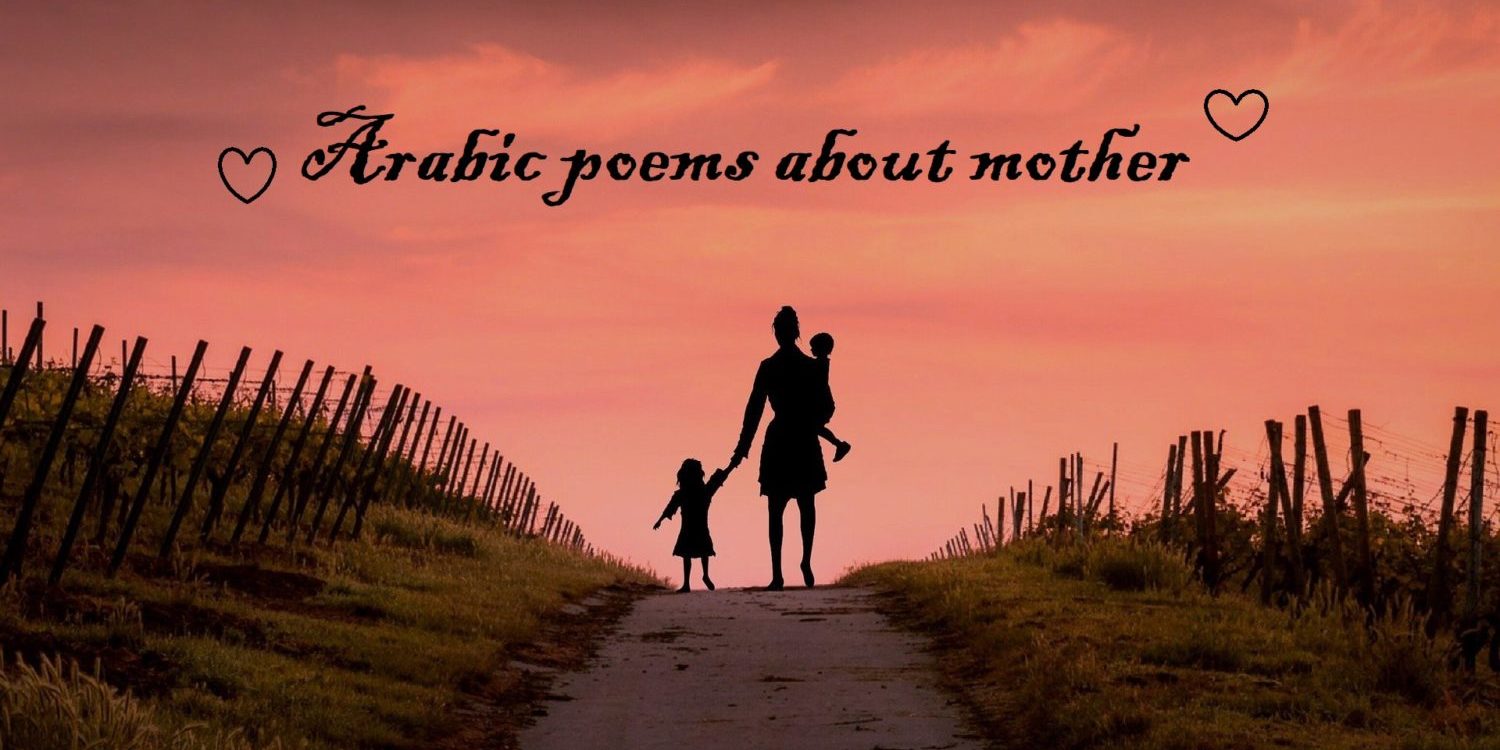 It is the hand that holds us before our fall

She is the heart that injects the soul into us, and the mother is the companion, friend, and heart that sincerely advises us

She is the person who is indispensable to us, even if there are many lovers and friends

It is also our first school and our guide to walking the path of life on a guided basis, with the lessons and advice it offers.

The mother bears her children for nine months and is here

She nourishes them from the sweetness of her milk and the essence of her soul,

Watch their growth phases with love and passion

You stay up for their rest for long nights, tirelessly or boredom.

She is the ideal and the model, moved towards her altruistic children; She is the only person who may forget to pray for herself in her prayer because she is busy praying for them

It offers them what they need without waiting for anything in return, its advantages over us are countless

The mother is the origin from which society, the family, the state, and the nation begin.

She is the custodian of men, and she is the nanny of generations

She is his other half

Many mothers are working to do good for their community, her family, and the whole world

It is the mystery of existence that carries us in his body, nurtures us gently, and bears the pain and pain of our birth

So he kept her up all those nights for us, and all that she offered in order to lead a happy and safe life that we are not afraid of cold, hunger, or loss, is priceless.

Mother is too great for words to describe

Deep enough to be contained in the phrases

It is the garden in which life blossoms

It is the broad embrace that accommodates the entire universe

She keeps giving him everything she can from her body and soul, and keenly watches him until he is born

Then you turn into a dedicated person day and night who does not know complaint, fatigue or boredom

She responds to her baby with just a nod, knowing that he needs it

Mum is a mother all the time.

The mother with the uninterrupted credit

It is she who educates and watches, and she who teaches

And if someone wanted to count his mother’s favor over him, he would not be able to fulfill her right, even with a small part of what she gave.

It is sufficient for her to worry and fear, which eats from her heart whenever her children move away from her.

Because of all these great roles about the mother, our Arab poets did not hesitate for a single moment to praise her and wrote hundreds of poems praising her great role. 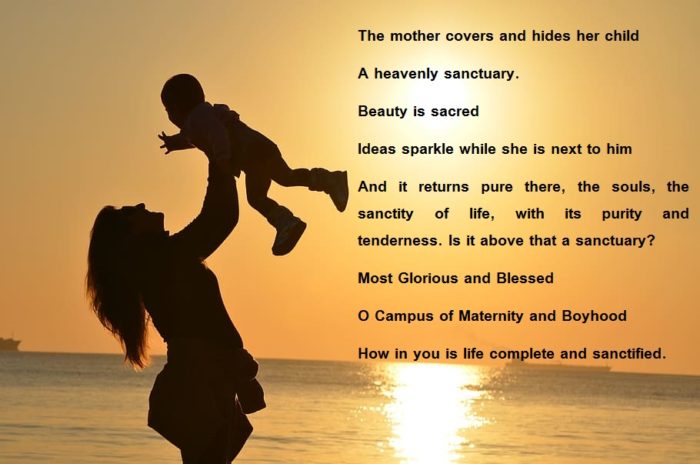 Poems by Maari on the mother

Poet, linguist, philosopher, and writer from the Arab Abbasid era

He was called the owner of the two prisons

He was locked into the house and locked in blindness

He wrote many poems about the mother, including:

Live in a past, be honorable

Your parents are with him and your mother is first

Calculate it with honor and charity

Pregnancy and lactation are addictive

Two things are given to everyone.

A poem about the mother by Marouf al-Rusafi

Obligations to honor my mother

My mother deserves to be honored

She carried me as a baby.

Until I left her sleep for my sleep

Praise be to her after Hamdi my God

And thanks for her over the days.

A poem by Mahmoud Darwish about the mother

And from those who introduced symbolism in it

Love of the homeland mixed in his poetry with the love of his beloved,

He has many poetic works

Among the most beautiful poems, he wrote about the mother is a poem I feel nostalgic about my mother’s bread, which says:

I miss my mother to bake

And grow up in childhood

Day on the chest, day in love with my life

Because if I die

I am ashamed of my mother’s tears .. Take me

If you come back one day

Felt a thread waving around the hem of your dress.

May I get from your garment

If it touched the bottom of your heart

If I come back

Make me fuel in your fireplace.

And a clothesline on your roof

Because I lost standing

Without your prayers I am old,

Turn back childhood stars so that I can join the birds on the path of return.

To nest where I am waiting for you.

A poem by the great Ahmad Shouqi 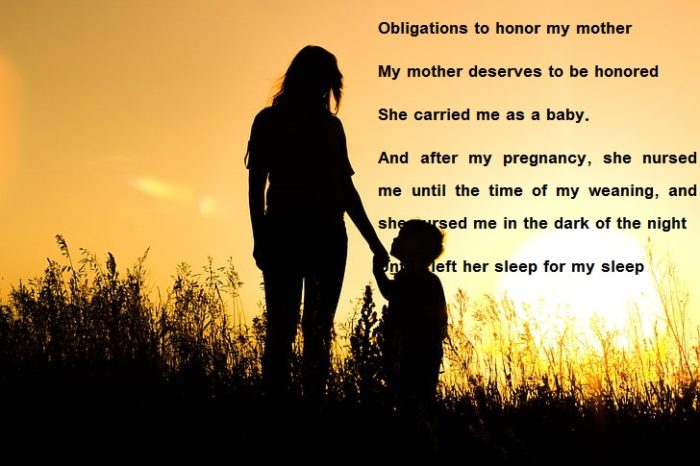 On the boy who sailed

With his fabulous journey

And he hid it in his bags

And its stars and rivers

Hide it in his clothes

Tarabin of mint and thyme

And a damask night

My seat gets bored

And my sadness is as birds could not migrate.

I knew the women of Europe.

I knew the emotions of cement and wood

I knew a civilization of fatigue ..

I did not find … a woman

She is combing my blonde hair

She carries sugar dolls in her bag to me

And wear me if I naked

I became a father … and never grew up?

What is her news Fella?

I recommend it to you, mother.

She was the most beloved of my father’s girlfriend.

And he invites her to his cup of coffee

He watered her and fed her.

And he covers her with his mercy.

And you ask about his cloak.

And you ask about his newspaper ..

And when summer comes, she asks about Fayrouz’s eyes

To be scattered over his hands.

To a house that brought us to love

And compassion to your white flowers.

Shabbi poet in his poem

you are Blessed, motherhood

The mother covers and hides her child

Ideas sparkle while she is next to him

And it returns pure there, the souls, the sanctity of life, with its purity and tenderness. Is it above that a sanctuary?

Most Glorious and Blessed

O Campus of Maternity and Boyhood

How in you is life complete and sanctified.

A mother is a school if you set it up

you prepare good people for the races.

The mother tamed his vivid pledge

to irrigate whatever spills.

The mother is the professor of the mechanical professors.

The mother preoccupied them with their exploits with great potential.

A man tempted one day a foolish boy

With his money until he gets it bad.

He said, bring me the heart of your dear mother, boy

And you will get the jewels, dirhams, and pearls.

So he went and sheathed a dagger in her chest

And the heart brought it out and came back on the effect.

But he was so amazed

Mother’s heart called him when he was forgiven

My son, darling, did I harm you?

As if this voice despite his affection

Heaven’s anger poured over the boy.

He drew his dagger to stab himself.

Stabbing will remain a lesson for those who are considered.

Do not stab my heart twice on the effect.

Life goes on quickly so honor your parents with it

Mother is the first with honor and charity.

And then pregnancy and lactation addicted to it

Two things are given to every human being.

In the corner, the mother’s face looks like I can’t see

Because it inhabited delinquencies for years.

If the eye neglects a little, it does not see

But he who dwells in raptors will not be absent

My mother’s face appears in front of me

Whenever the winds of sadness intensified

People travel in the eyes and disappear

And it becomes sadness in the ribs

A shiver in the heart, pounding every once in a while.

But she is my mother. Life passes by. I live in her and she lives with me.

Since we split up and how far around me

Everything after Omar Dhanin

With the days it became a nice thing

He does not miss and does not show

A spectrum we call nostalgia 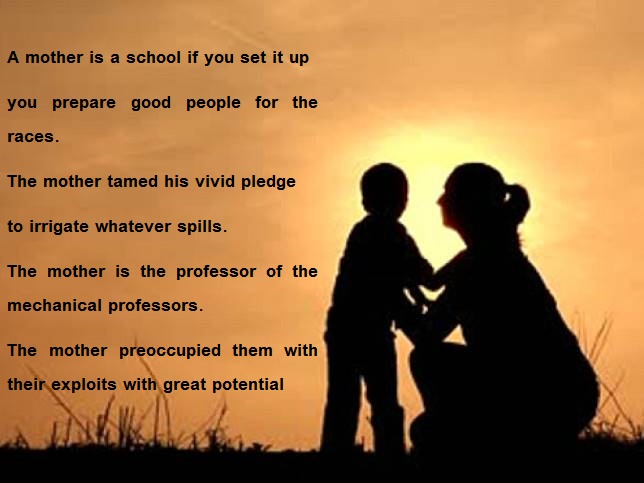 The mother is the basis of all matters

Spring with all goodness, pure water

From this source is tenderness, and from her heart

The warmth of motherhood have you found like it

You feel all safety in her bosom

She was your bearer in pain and at birth

She measured and almost perished

O pregnancy heartbreak how much she faced

If pregnancy and breastfeeding were a burden on mountains, this would guide them

How much she endured, but in an instant

Forget worries if she saw her baby

How long she has been through breastfeeding and nursery

How much she struggled to grow old

No matter how healthy you search for food

She breastfed the best food for her child

How much she stayed up at night if he had cried

She took pleasure in her sweet sleep

O her sadness if he did not sleep from a cause

Sick next to him calling her Lord

She cries if she is unable and for a long time

And she would hope if she would redeem him by herself

Here we have come to the end of our beautiful article on Arabic poems about the mother.

Thanks for reading, dear reader.

Always remember to please your mother, because by losing her, you will lose a lot

You will never feel this in her life

Love her, respect her, and do everything for her comfort.